There are 3 main ways to access the Sisense API:

For any type of use outside of our documentation, you will need to obtain and use an authentication token, using a process outlined below. To use our internal tool, you will only need to be logged in to Sisense.*

You can open the API reference by following these steps: 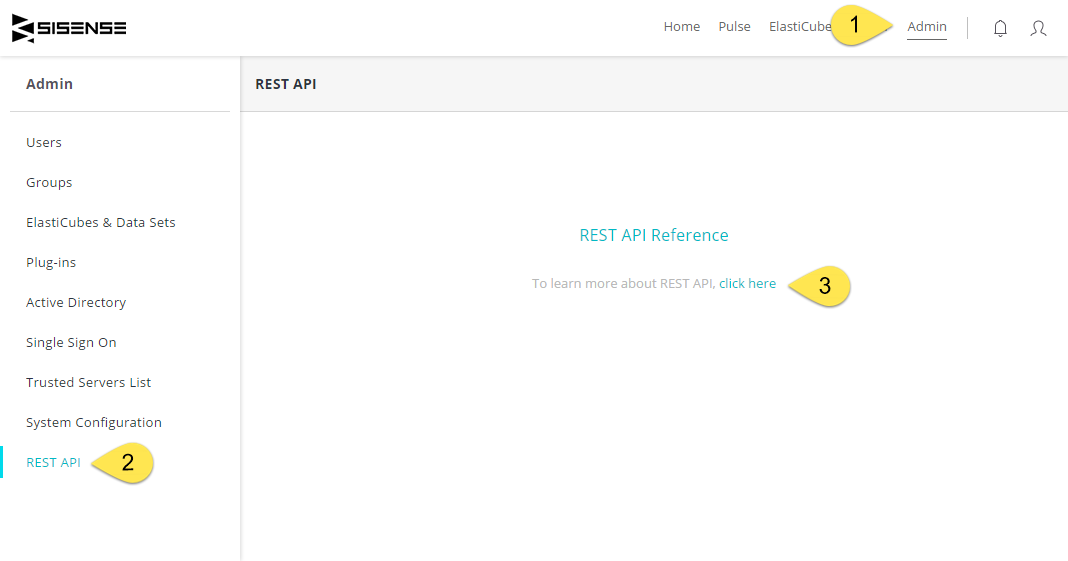 Or by going to the following URL:

(Note: Replace https://example.com:8081/ with the URL of your Sisense server!)

You can select the API version you would like to work with in the top bar (currently, the versions are 0.9 and 1.0) and see the list of existing APIs in each version. Once an API is expanded, you'll be able to see all the functions it supports as well as their request types (GET/POST/PUT/DELETE etc. - detailed below) and the parameters and/or possible results of each.

If you're accessing Sisense via HTTPS, in some versions of Sisense you will have to manually select the HTTPS schema at the top of the Interactive API Reference screen:

If you're familiar with javascript and would like to work with the Sisense API from a script, we recommend trying out Node.js, but you can use other scripting languages such as Python, any non-script language (such as Java or C#) or by sending requests from your web application, using a library that supports ajax requests such as jQuery, etc.

Below you'll find important information on how to use the Sisense REST API correctly, regardless of the method you choose.

The Sisense REST API requires that you send an authentication token with each request. The token lets the server verify your identity.

In Sisense each user has their own API Token that must be included in the header of the request. This procedure is described below.

# Getting the API Token from User Profiles

This is a new feature available only from version L2022.3, and is not enabled by default.

Starting from version L2022.3 you can use the User Profiles UI in order to retrieve or renew your API token.

# Getting the API Token from the Authentication API

The username must be URL encoded. For example @ should be written as %40.

You will then receive a response with your authentication token in a JSON response.

Below is an example of Javascript code that sends this request, using jQuery:

# Using the API token in requests

For every API call you must include the following header:

There is a single space between "Bearer" and your token.

A popular tool for running REST API calls is Postman , which lets you run HTTP requests using a dedicated GUI. The HTTP requests can be executed to view the result, or saved as code snippets in a variety of programming languages.

You can also use cURL from command line, or any other tool that can run HTTP requests with your headers and data.

The token you must include in the Header for version 6.0 and later is the User Token, which you can retrieve through the Post method authentication/login/ endpoint in version 1.0 of the REST API

An HTTP request can be of the following 5 types, each explicitly defining the kind of result this request is trying to achieve.

POST requests are meant to create entities or perform actions.

A post request will contain an entity's data as it's payload, and it will be added to the relevant collection (for example, adding a new user).

Note that for most entities, such as users, there are validation rules preventing duplication (for example, it's impossible to add 2 users with the same user id) meaning that a second POST with the same user JSON will result in an error.

PUT requests are a way to replace an existing entity. When passing an object via PUT if the entity of the same ID exists it will be replaced, meaning that if certain fields that existed previously are absent from the passed data, they will not be kept. This means that a PUT request's payload should contain all required fields of the entity!

PATCH requests are a way to update an entity without replacing it. The provided data will be merged with the existing data, so that only fields specified in the request will be updated and the rest will remain as they were.

DELETE requests are meant to delete an entity. Sometimes, it might be possible to DELETE an entire collection.

The new Sisense API supports a standard set of fields for GET requests, allowing for increased flexibility in the way data is retrieved and used.

Allows you to declare specific fields of the entity you're getting.

Can be comma delimited, without spaces, and - can be used for exclusion.

Allows you to sort the returned data by the specified field, where normally data is sorted in ascending order, and - indicated descending order. For example:

These two fields allow you to get a specified number of results (limit) at a specified offset (skip), which is useful for server-side paging. For example: limit: 10, skip: 20 will return the third set of 10 results

The expand field lets you define foreign-key fields which you would like to replace with their actual entities. For example, a user might have a property called groups, an array of ID's where each group is an entity in it's own. Using expand: "groups" we will get each user object with an array of actual group objects instead of their IDs.

This field can be combined with others (for example expand: "groups(fields:name)" will get only the name field of each group to replace the group ID) and can be nested (expand: "groups,groups.users" will get a user's groups, and their collection of users).

For example, the request

Errors returned by the new API have been standardized in structure, and will always contain the following properties:

Depending on the error type, other fields might be present. For example, for a not found exception, the fields resourceType and resourceName will be present, to indicate exactly what resource was not found.